Today, 10 million ETH is equivalent to ~$2 billion USD. That’s how much we estimate the PlusToken scheme was able to absorb from over 800,000 participants in ETH alone.

It is surprising that a Ponzi scheme of this magnitude went largely unnoticed by the English-speaking internet until recently. And even now that the scheme has been exposed, we find only scarce information available regarding what actually happened or the amount of funds involved.

To shed some light on the PlusToken situation, we decided to take a look at their activity on Ethereum. All the results below were generated via the Elementus Query Engine and are independently verifiable against the Ethereum blockchain. Source data and methods are described at the bottom of the post.

Each of these points is explained in more detail below. 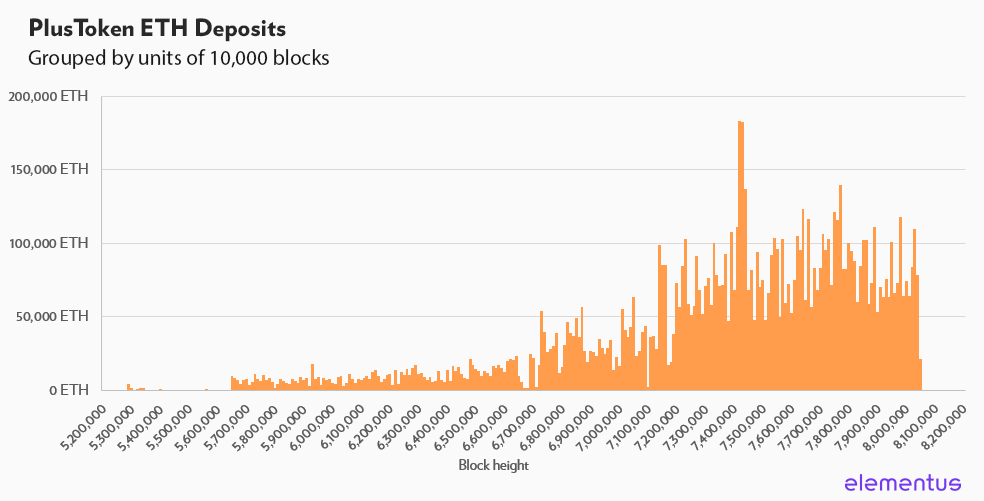 In the above time series, binned by block number instead of time, we measured the total volume of ETH collected by PlusToken.

Notice the sudden halt in deposits near block 8,040,000 (June 27th). This is the same day that several members of the PlusToken team were reportedly arrested in Vanuatu.

3/ The #PlusToken scam is alleged to have been ended by #Vanuatu Police on the 27th of June. According to reports in Chinese media on the 1st of July that showed photos of some of the suspects arrested in Vanuatu & the alleged ring leader in China who was reported to be at large. pic.twitter.com/9knaWlSzIa

Most of the funds have been paid out

Of the 9.9 million ETH collected by PlusToken, 9.2 million ETH has already been sent out. 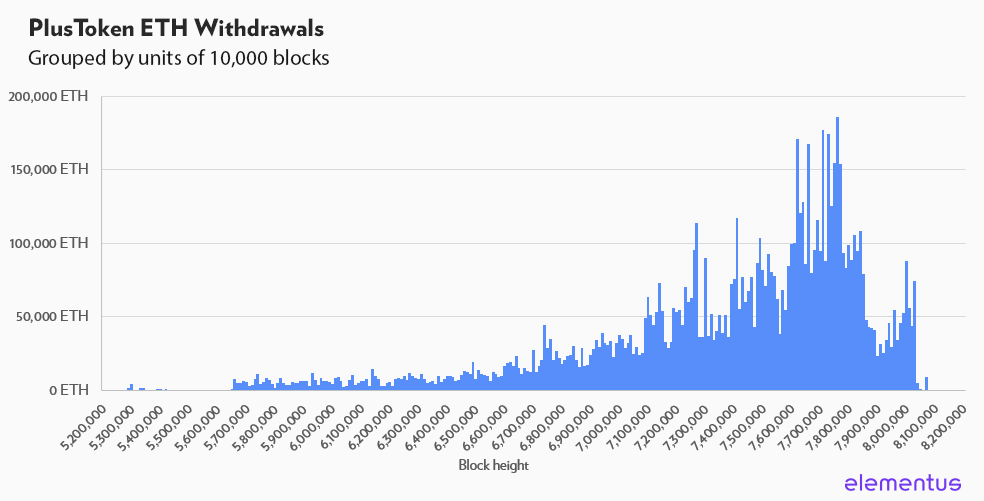 In the above plot, we measure the Ethereum withdrawals from PlusToken over time (binned by block number). Notice the spike in withdrawals around block 7,700,000, which is about a month before all user funds were frozen on June 27th (block 8,040,000).

Of the 9.9 million ETH collected by PlusToken, 820k ETH (about ~$166 million) remains on-chain, consolidated into the three addresses above.

Yes, there have already been big winners

The payouts were distributed across 248k different addresses. However, the volume of ETH is heavily concentrated in a few recipient addresses.

Assuming each of these addresses truly represents a single PlusToken participant, half of the ETH intake (~5 million ETH) was paid out to just ~7k "big winners" (less than 1% of participants). Those at the very top took out ETH valued at millions of dollars.

We list the top 10 biggest PlusToken "winners," along with their total ETH received below.

It remains unclear whether these addresses truly represent users at the top of the pyramid, or a PlusToken exit scam disguised as user withdrawals.

However, we were able to chart the destinations of outgoing funds in the next section, and in doing so found some hints as to who may have the answer.

Our data also allows us to compile payout totals by receiving entity, where it can be seen that almost 50% of all withdrawals were sent to Huobi, indicating an unusually strong bias toward the Chinese exchange. 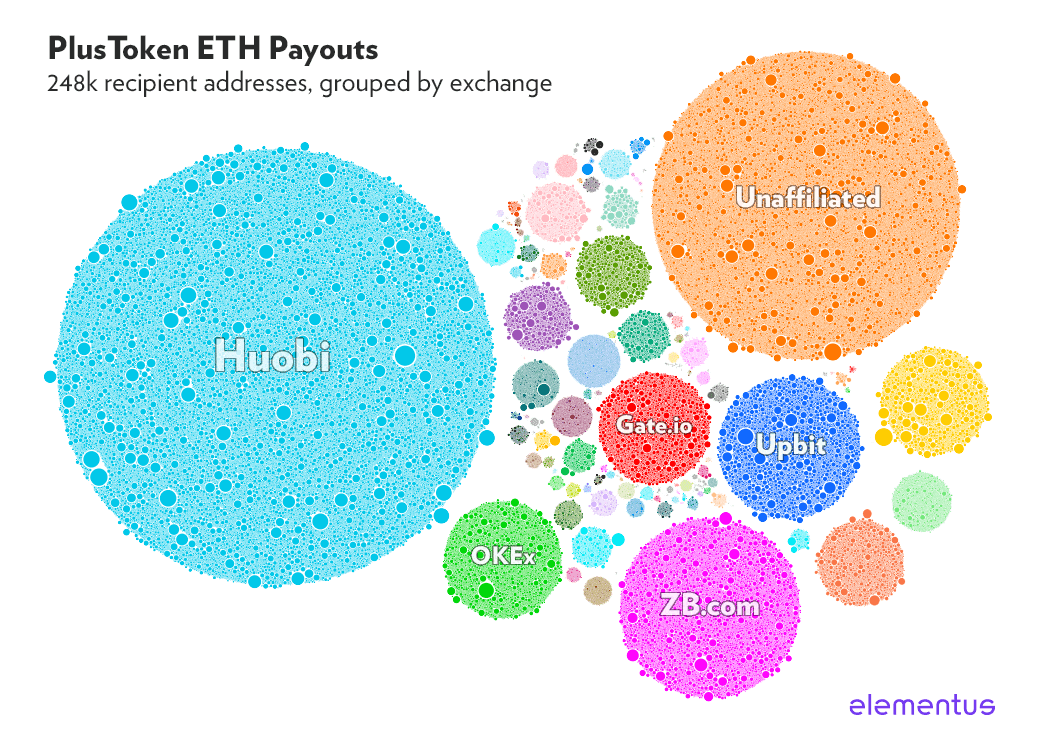 The graphic above shows all 248k addresses that received ETH payouts from PlusToken, most of which were deposited into exchanges. The five largest exchange recipients are labeled in the graphic and broken out in the table below.

In our view, this unusually high concentration of payouts in no way implies any wrongdoing on the part of Huobi. Rather, it raises the question of why so many PlusToken users would choose to store their winnings in that particular exchange.

How much did PlusToken collect from users across all cryptocurrencies?

PlusToken took in nearly $2bn in ETH alone. Considering the scheme was also highly active in BTC, XRP and EOS, once these amounts are considered, we anticipate PlusToken will emerge as the largest crypto Ponzi scheme yet, surpassing BitConnect/OneCoin/MMM by a substantial margin.

We are working on a final tally. Stay tuned to this blog for updates. 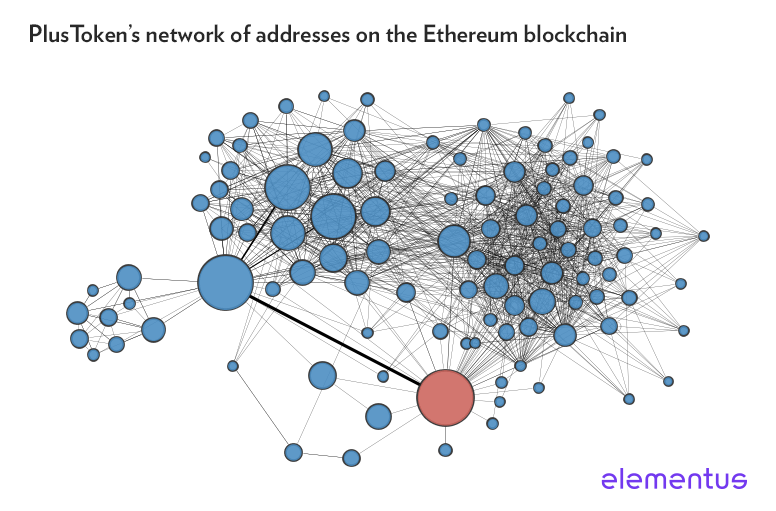 The above graphic shows the PlusToken cluster, as determined by the Elementus Query Engine. Each node represents a Ethereum address controlled by PlusToken and each edge represents a transaction between two addresses.

The red node at the bottom is the main PlusToken address, which served as the entry point for PlusToken deposits and where the bulk of remaining ETH currently sits. The blue nodes were used to process withdrawals.

For all calculations above, all addresses in the PlusToken cluster were consolidated and treated as a single entity. Hence, incoming/outgoing amounts represent the sum total transferred in/out of any addresses in the cluster.

The list of addresses shown can be downloaded here.