Yesterday, rumors began circulating about a possible hack of CoinBene, after the exchange announced they were down for maintenance.

This morning, they sent out the following Tweet, assuring the public that users' assets are 100% secure.

#Announcement ‼
Somebody doubt CoinBene was attacked by hacker recently because our maintenance.
We CoinBene are so sorry that made everyone worried for this problem.
Truth is 👇 pic.twitter.com/2P8Ulwjj6C

The beauty of the blockchain is that it is completely transparent to those who know how to read it. Our rationale behind releasing the findings below is to make public what is already public.

We are not here to refute what CoinBene is claiming, but to present what we found via the Elementus Query Engine.

All information shown below is independently verifiable. The raw data may be downloaded here and compared against the Ethereum blockchain.

Below is a timeline of events. All times are Eastern Time (GMT-4).

The graphic below shows the movement of these funds after leaving CoinBene. 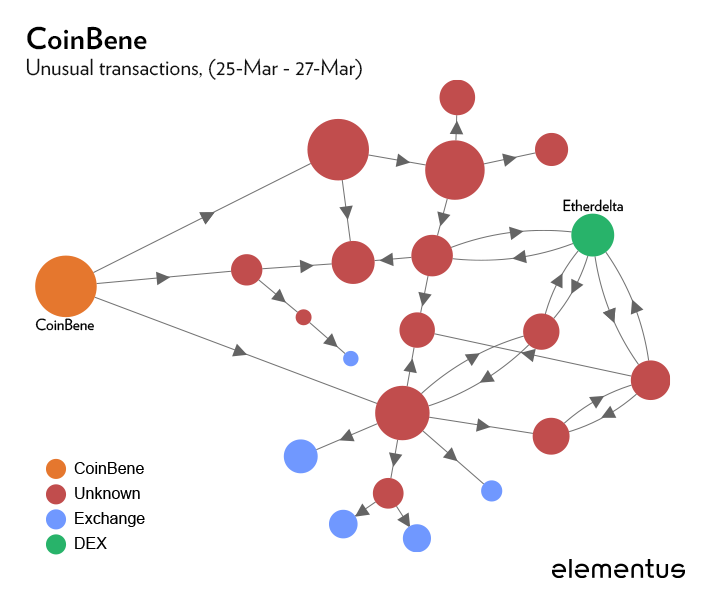 The movements of funds after leaving CoinBene

The amount of crypto involved is huge. Transfers of this size are not unheard-of when an exchange is moving funds between hot and cold wallets, but that is clearly not what's happening here.

After leaving CoinBene, the tokens were quickly moved into Etherdelta, where they were sold for ETH. A large amount of funds were also moved into centralized Exchanges, including Binance, Huobi and Bittrex. The funds continue to move into exchanges as I write this.

Moving funds through sweeping addresses is not commonly done by exchanges

The pattern of transfers between multiple intermediary wallets is not commonly seen among exchanges. It is, however, a common tactic for people who want to cover their tracks -- moving the crypto through a series of "sweeping addresses" to make the trail more difficult to follow.

The sequence of events is consistent with a hack

The sequence of events -- large amount of funds withdrawn quickly, period of inactivity, remaining funds secured into the cold wallet -- is consistent with how exchange hacks commonly play out.

We have no basis for judging CoinBene's credibility, but it is noteworthy they were example #1 in BitWise's recent report on fake exchange volumes. 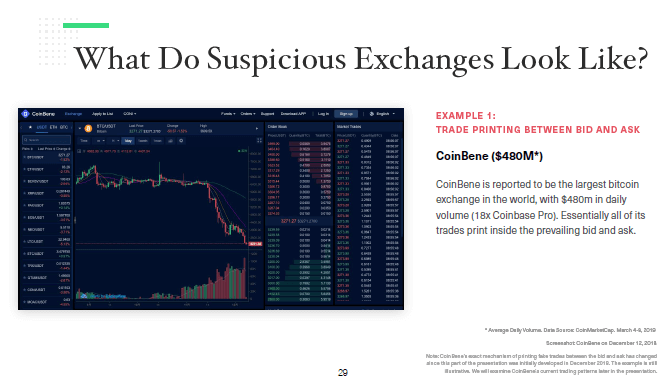 The $105m in market value includes positions in 110 different cryptos (see the full breakdown here). The largest position is $70m of Maximine, a token whose price has climbed 754.5% since the start of the month.

We will continue monitoring events and updating this post with new developments.

All data shown in this report may be downloaded here.

Today, 10 million ETH is equivalent to ~$2 billion USD. That’s how much we estimate the PlusToken scheme…

In our investigation of the Cryptopia hack, posted last week, we highlighted that thousands of Cryptopia wallets may still…