I remember it like it was this morning. I was an adjunct lecturer teaching data science at UPenn and the spring semester was coming to an end. The day was beautiful, but the final projects were in and I had a lot of grading to do.

I made no progress on the grading. Instead I started to explore Ethereum data -- public data open to anyone but very difficult to understand. Even for data heads like me.

I fell into the rabbit hole of blockchain that day and I have yet to come out.

I have spent my life trying to make sense of big data sets. As a derivatives trader at Deutsche Bank and Credit Suisse, I used financial data to assess risk and capitalize on market opportunities. Later, I founded Revaluate, where I analyzed public data to derive insights about real estate. As a blogger, I have published data analyses and data visualizations on topics ranging from immigration and elections to flight patterns and international trade.

Upon discovering Ethereum, Bitcoin, and the incredible blockchain technology underlying them, I was immediately captivated. I was simultaneously enthralled by the vastness of the sea of blockchain data and frustrated by how difficult it is to harness it for the greater good.

I have no doubt that blockchain and cryptocurrency are the bedrock of the alternate digital financial system that’s being built brick by brick before our eyes. But the underlying data is opaque – both a bug in the system for humans wanting to read it and a convenient feature for criminals on the dark web.

I started Elementus, my New York-based stealth blockchain and crypto analytics startup as a former Wall Street trader and data scientist. I understood both the positive, powerful effects of immense data sets and the opportunity for the financial system to leverage the transparency to build previously-unimaginable products.

Today, three years later, I’m proud to report that Elementus has quietly made its way to the forefront of an increasingly crowded and competitive blockchain data analytics space with a universal search engine and analytics platform built on patent-pending next generation tech that does for blockchain what Google did for the web. We make the network readable, usable and safe.

Announcing our Series A

I couldn’t be more excited to announce that an impressive roster of traditional and crypto funds/ have both validated our approach and technology while sharing our powerful vision to bring light to a once-dark emerging sector of the internet.

The funds will be used to accelerate our early customer successes. My goal is to build one of the best mission-driven teams in crypto while attracting customers that share our belief that transparency will drive trust for all companies that want to participate in the exciting crypto industry. And that trust in the broadest sense – among individuals, businesses, government regulators and other stakeholders – will allow our industry to reach its full potential.

What we have accomplished and plan to do with the funds announced today is provide an institutional grade platform that offers the search speed and scope of Google and the data insight of the Palantir platform. Trust me. This is no easy task.

But we are doing it.

Just as Google organized the internet of information for consumers and commerce by indexing the World Wide Web, making it accessible without requiring any knowledge about the underlying TCP/IP protocol, Elementus is building the pathway for the internet of value, its universal search engine inviting institutional users to easily access, visualize, analyze, and explore as much or as little of any blockchain at the ledger level as they need. 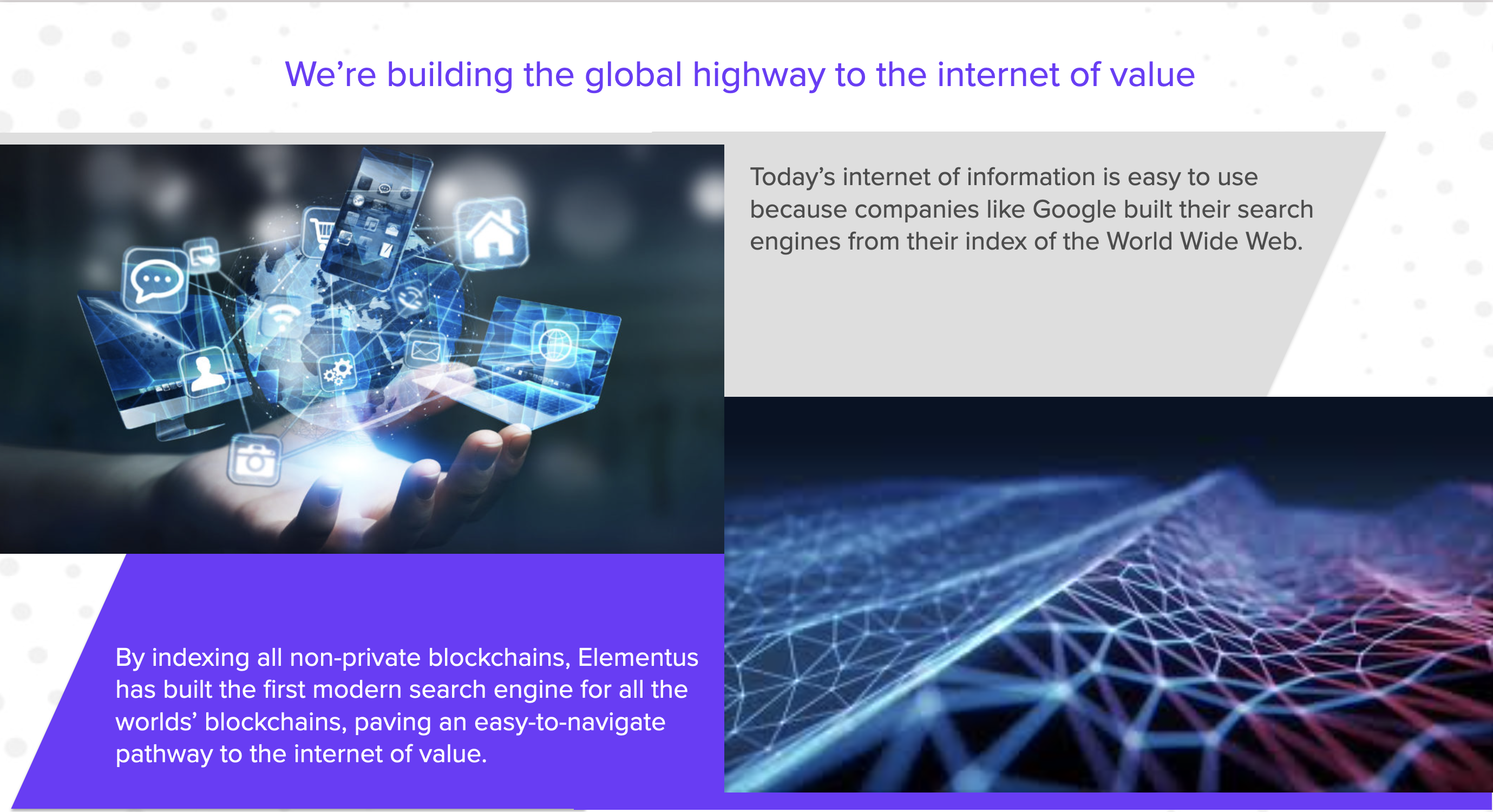 At the same time, the Elementus analytical platform does for blockchain data what Palantir’s integration and analysis products have done to revolutionize data crunching at massive scale.

Indeed, the Palantir DNA is deeply embedded, with Elementus being selected as one of the first companies in Palantir’s Foundry for Builders Program, which will turbocharge our analytic products using the Palantir Foundry platform. Elementus has also added several key hires to its team for good measure who are Palantir alumni.

Our secret sauce is contained in our backend SourceFlow™ entity attribution algorithm, used to build the global EntityIndex™ and the related frontend RapidTrace™ and RapidRank™ technologies used to identify and trace suspicious funds and help institutions rank entities in order of risk.

The Elementus algorithm vastly outperforms other analytics solutions. Instead of the traditional transaction-level analysis that is currently the norm, Elementus offers a sweeping macro level view of entire blockchain networks that can be queried at a fraction of the time and an order of magnitude deeper.

When I asked Velvet Sea Ventures’ Michael Lazerow why he was so interested in Elementus, he wrote me, “Elementus is the first blockchain analytics company that didn’t ignore the deep problems underlying blockchain data in its native form. Nor did it take the easy way out by creating expedient but deeply limiting workarounds. Instead, the exceptional data scientists at Elementus attacked these seemingly intractable problems head on, focusing all their efforts on making blockchain data transparent, granular, auditable, and above all, readable.”

Organizing, indexing, and making searchable virtually all public blockchains is no small technological feat, even for the seasoned team at Elementus. I am a student of entrepreneurship and innovation. And the best businesses are founded by entrepreneurs with domain expertise trained to focus on the specific problem being solved.

I feel fortunate that my training at Wharton, my work teaching data science at the University of Pennsylvania, and long days (and nights) as an esoteric derivatives trader at Deutsche Bank and Credit Suisse provided me the background to attack the core blockchain readability issue.

But it is the team that we’ve assembled that I am most proud of — a tightly-knit crew of people I never imagined I would be able to work with. Together they are a dream team of the best data scientists, developers, analysts, business, and executives in the business.

As traditional financial institutions hunger for a piece of the multi-trillion dollar market and crypto exchanges adopt traditional KYC and compliance requirements in order to go mainstream, Elementus is creating a bridge between these two worlds to help shape the new era of decentralized digital finance.

I remember back to my first day in the rabbit hole. And there is no place I’d rather be.

Are you interested in jumping into the rabbit hole as a team member, partner, or customer? If so, don’t hesitate to reach out to me personally at [email protected]

How could the blockchain change transactions?

My name is Trent Fowler, and I’m a data scientist at Elementus. When I’m not helping to…